A Five Course Meal For Your Extra Orchard Apples

As the wind grows sharper and the leaves turn orange, apple orchards around Madison open their gates. People flock to them to stroll between the beautiful trees, take pictures with red noses, and pick apples with gloved hands. New couples, groups of friends, and families mingle with farmers as bags of apples and homemade jam are bought and sold by smiling faces. Farmers have worked diligently all year for this season, and as their orchards open and people begin to enjoy the fruits of their labor, everyone looks forward to the beginning of the holiday season.

However, after the jaunt to and from the orchard is over, the apples themselves are often forgotten. They come back to people’s houses to sit on the counter, and many are unceremoniously tossed out. The experience of the apple orchard is a fond memory, but the months of labor the farmers put into the fruits themselves is forgotten.

Oftentimes, this happens because people don’t know what to do with the extras. I mean, a person can only eat so many raw apples before the taste gets old. However, there are many creative recipes out there that use apples, and many of them are quick and easy to make.

Instead of letting the experience of the apple orchard end with your drive back, consider extending the memory into your home with one or all of the recipes included in this five course, apple-laden meal!

A simple salad incorporating raw sliced apples. It has a strong sweetness from the apples and cranberries that is mellowed by the walnuts and onions. The spinach acts as a tasteful carrier. Great with or without dressing! A simple appetizer that capitalizes on the raw sweetness of the apples juxtaposed with the creamy savoriness of the camembert. Serve with a white wine.

A sweet yet strong cocktail that uses apple butter, fruit juices, triple sec, and rum to make a drink reminiscent of apple pie. At the end of the article, there is an extra recipe on how to make the apple butter at home!

A spicy soup perfect for the fall. It has a soft flavor coming from the light ingredients (apples, carrots, onions, celery) that is accentuated by the powerful flavors of the bay, cinnamon, and curry powder. Great for a cold night when you don’t want to eat anything too heavy.

A classic seared pork chop, spiced traditionally with the addition of powerful smoked paprika. Pork chops have always gone will with the juicy sweetness of apples, and this one-pan rendition is an easy and extremely tasty way to use up a couple of those orchard extras. 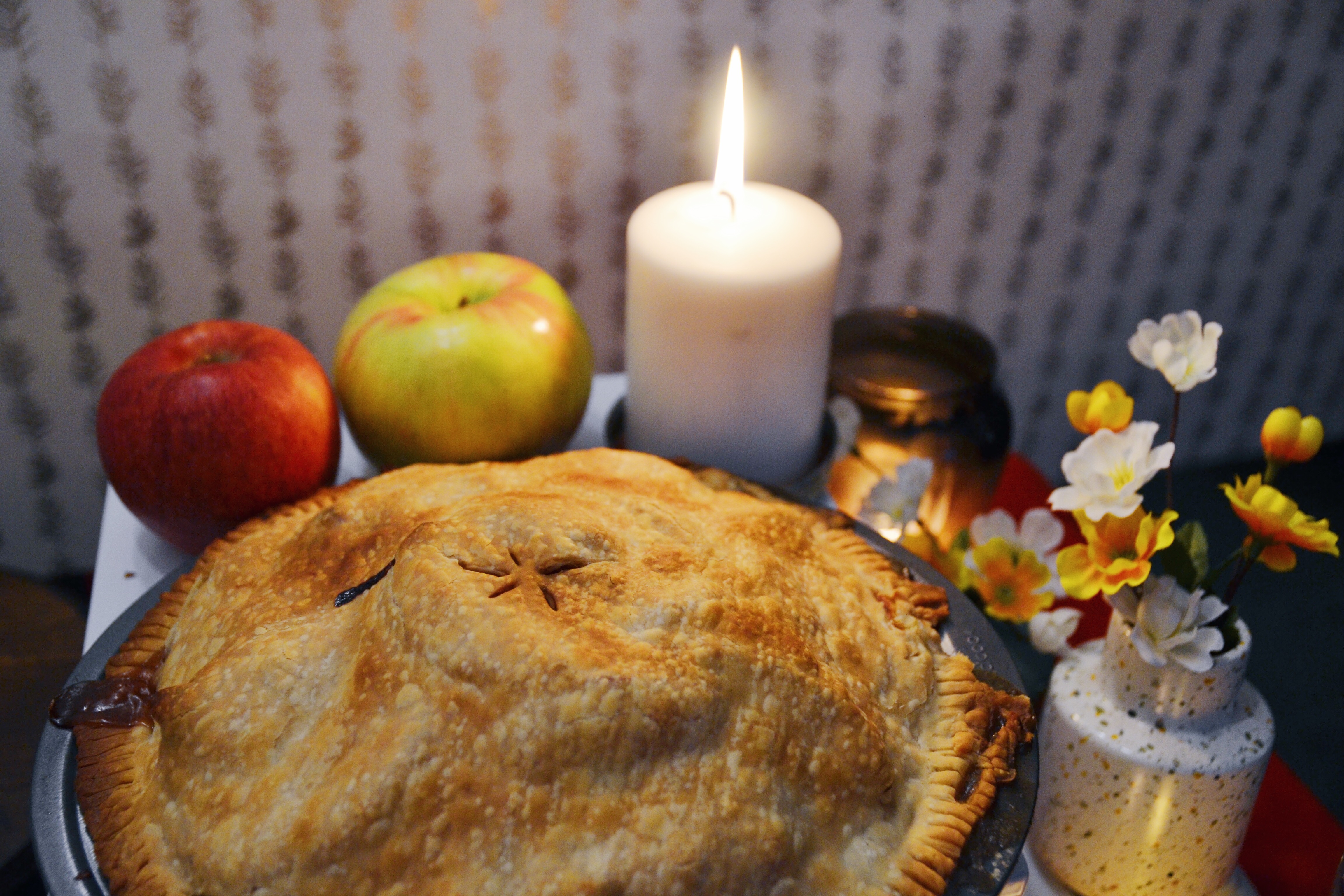 We couldn’t avoid a classic! This no-frills apple pie is fantastic as is, but this recipe is simple enough that a little tweaking to taste is absolutely okay. Adding new spices, some hand-whipped cream, or a decorative crust and egg wash are just a couple ways you could have fun with this recipe.

Apple butter is a staple of any fall kitchen. An easy, long-lasting spreadable, it can be incorporated into drinks, put on morning toast, added into soups, or just eaten by itself as a warm dessert with some cream. On top of that, if you freeze it, you can make huge batches that will last you until spring!

This five course meal is just the tip of the iceberg. From meat dishes utilizing sweet apples to cut their savoriness to cocktails with tart green apples for a clean drink, they can be used to add a bit of an interesting edge to any dish.

Throw some of your orchard apples into these recipes and you will find that seasonal meals not only taste amazing, but are fun and easy to make. Before you know it, you’ll have used all your extra apples and have a reason to get some friends together to get some more!