For generations, Friday fish fry has been a staple of Wisconsin culture. Mike Seidel has reviewed over 1,200 fish fries on his website, Madison Fish Fry, keeping the iconically Wisconsin tradition alive.

Growing up in Viroqua, Wisconsin, Seidel’s family adhered to the Wisconsin ritual of fish fry on Friday and prime rib on Saturday. For Seidel, the thick indulgence of a prime rib was preferable to transporting their fish home in squeaky styrofoam containers. After the two mile pilgrimage home, Seidel would pop open the container’s lid and bask in the rising steam. However, his fingers would meet a crumbling beer batter made damp by the warm air captured in the styrofoam. To avoid this ill fate, a young Seidel quickly learned to order a more mobile fish such as poor man’s lobster, a baked alternative without the mercurial batter.

“It’s not the same as sitting at a restaurant, getting a fresh, steaming plate of fish. Chowing it down and burning the roof of your mouth and slugging your beer down to quell it,” said Seidel.

Despite auspicious beginnings, the Friday fish fry would remain a steadfast weekly tradition. After graduating from UW-Madison in 2003, Seidel and a hometown friend, Gabe Krambs, continued observing Friday fish fry at Fitzgerald’s supper club in Middleton. Hoping to expand their learning of the fish fry gospel, the pair decided it was time to discover new spots. However, they were dismayed to find limited information available about local fish fries.

Emboldened by a mutual love of lists, Seidel and his partner began journeying to new fish fries and recording their thoughts in an Excel sheet. Eventually, the Excel sheet turned into the website Madison Fish Fry, a database of Wisconsin fish fries with more than 1,200 of Seidel’s reviews.

If you are looking to find Seidel on a Friday, he is most likely tearing apart flaky, golden fish with his fingers for both lunch and dinner. Many local establishments have expanded their Friday night special to lunch due to its iconography. For Wisconsinites, Friday fish fry is an opportunity to shake hands with your neighbors and toast to the close of another week of hard work. Friday fish fry is simultaneously soul-replenishing and the soul of communities themselves.

The tradition of serving fish on a Friday stems from German and Polish immigrants who avoided red meat on Fridays during Lent by eating fish. During the Prohibition era, the pungent aroma of an all-you-can-eat fish fries served as a cover for establishments providing alcohol. In the 21st century, Friday fish fries remain a beloved staple of a uniquely statewide tradition, spanning across the lifetimes of Wisconsin’s citizenry.

“That’s the thing about fish fries. People for the most part grew up eating them and you know, it resonates deeply with them,” Seidel said. “And maybe you don’t remember the exact fish you ate but you remember how your dad smelled when you went to the fish fry, you know? You remember the hat he used to wear to the fish fry.”

Fish fry is not just limited to Fridays. On a brisk night, Seidel is hunkered over the Wednesday special at Jordan’s Big 10 Pub on Regent Street: crisp canoes of breaded perch lay gently over shoestring fries with acidic coleslaw and potent tartar sauce. Seidel immediately points out the slice of rye bread, a nod to classic Milwaukee fish fry tradition. He snaps a photograph for the website’s Instagram with little fanfare, insisting on presenting the dish exactly as it was placed. Setting down the phone, he lifts a filet of lake fish. Judgement day has arrived.

“Me and my coworkers would go to Wilson’s every Friday for lunch, pretty much. So I’ve eaten their fish fry a hundred and thirty times? Something like that,” Seidel said. “So they serve as my baseline. Everything is weighted against Wilson’s. So there’s a set number on all those categories and I base everything else off those experiences.”

Seidel’s reviews are processed with the mind of an academic and always begin by scoring the fish, potato, tartar and bread on a scale of poor to excellent. Excellent fish is flaky in texture and powerful in seasoning, especially with a beer batter. Fish fry folklore tells of many strategies for achieving the most flavorful batter: cracking the beer overnight and leaving it out to get stale, soaking the cod in beer or dredging the filet in evaporated milk before battering. Some restaurants hold their fish fry to such high standards that the recipes and strategies are relegated to sacred circles.

Though the fish may be at the center of the tradition, it is the atmosphere that ultimately separates a fish fry from a mere fish and chips experience. Seidel began the Friday ritual with his family and now brings his four-year-old son to for “fish and french fries with dad” after school.

“I think the fish fry is kind of one of those things where it’s a family thing, it’s a community thing. We all come together to do it. And in it’s way it defines us too,”  Seidel said. “I think people stop serving fish on Friday, people would be lost,” Seidel said. 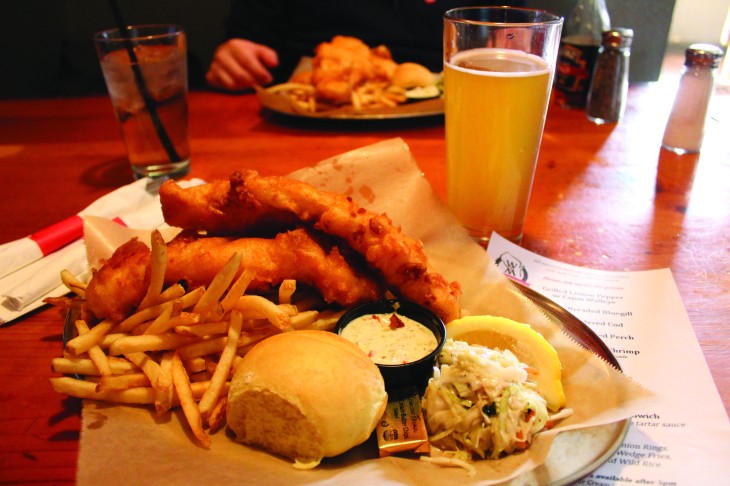 After reviewing over 1,200 fish fries, Mike Seidel has developed a system through which to evaluate each component.

“The perfect bite for me? You’ve got spicy breading. A nice, flaky fish with no grease. Just a thick tartar sauce that’s on there, kind of a stanky punch to it,” Seidel said. “You’ve got to get all three or four of those things melded together. It’s just a flavor explosion.”

The Fish “Fish is far and away the most important thing.”

As the core of the experience, it is no surprise Seidel’s first priority begins with the fish. Seidel believes a true fish fry should include a variety of fish, breadings and cooking methods. Additionally, the fish itself should be light on the grease and heavy on the flavor. Whether it be a salty punch or a smoky finish, the batter should complement the fish without completely masking its flavor. Bonus points if there is a drawn butter candle to dunk crisp fish into sweet butter.

The Sides “For me it’s not a real fish fry unless you get a slice of bread.”

A range of side dish options also scores points with Seidel. Be it a french fry or a pancake, the comforting familiarness of a potato based dish is always welcome. Additionally, coleslaw is often found on the plate. Finally, Seidel appreciates a chunk of rye bread, slathered with butter and topped with a sliced onion. In Madison, the rye bread is often replaced by a dinner roll.

The Tartar Sauce “I want to be able to dunk the fish and try to shake it and I don’t want it to go anywhere.”

The tartar sauce is the pièce de résistance, relying on a specific, thick texture to elevate the fish fry experience. Seidel prefers a tartar sauce that clings to the fish. Ultimately, the tartar sauce should serve to complement and enhance the other flavors on the plate.