A look into Madison’s premier restaurant group, how they function and why they’re still thriving over 20 years later. 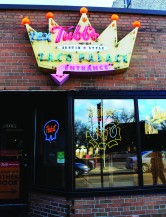 “We are the definition of local,” says the opening line of Food Fight’s webpage—a hub of all things delicious in Madison. Food Fight, a restaurant group based in Madison, markets themselves as the essence of the Madison local food scene. Founded by Monty’s Blue Plate Diner owner, Monty Schiro, and investor Peder Moren, Food Fight has been a staple of Madison’s restaurant industry since its establishment in 1994. The company aims to enrich the Madison community with diverse tastes and high-quality service, and has been succeeding for decades.

Since Food Fight’s humble beginnings 24 years ago, the company has undergone a metamorphosis. Today, the Food Fight name is synonymous to Madison’s burgeoning food scene. No two restaurants are alike. With restaurants specializing in American diner classics to nouveau Tex-Mex and trendy Hawaiian poké bowls, Food Fight has achieved what no other Madison food group has accomplished: a restaurant for everyone. From Johnny Delmonico’s premier steaks and top-shelf whiskey for dinner with the parents, to Cento’s warm interior and classic Italian fare on date night, to DLUX’s yuppie boozy brunch, Food Fight has a location for every occasion.

Despite multiple traditional Wisconsin outlets, Italian bistros and eateries paying homage to Mexican cuisine, each restaurant maintains its own charm. This can be seen in not only the dishes, but also in the ambiance. The secret to Food Fight’s success may lie in their continual investment in variety. Food Fight has successfully allowed its brand to adapt from one restaurant to the next, enabling each chef not only establish a distinctive range of flavors, but also create a one-of-a-kind atmosphere for guests.

“We really are given a lot of empowerment to run our own ships, put forth our own ideas, and we’re really included in everything,” Luce says.  She explains that Food Fight’s purpose is to ask, “What is your vision?” and “How can we help you polish that?” as they guide restaurants to their full potential.

Food Fight’s achievements go well beyond the kitchen, as each restaurant is enhanced by a group of ever-friendly, respectful employees. The Food Fight website highlights their staff as their “most valuable asset,” as the company strives to manage restaurants in which employees desire to learn and grow.

“It’s nice to know that if I do my job well, this is a place where I can stay,” said Maya Steinberger, a Cento hostess.

Founder Monty Schiro’s own professional beginnings, as a dishwasher at 13, waiter at 16, manager at 21, and finally, restaurant owner at just 24, are likely the inspiration behind Food Fight’s cultivation of each employee.

As the self-proclaimed definition of Madison locality, Food Fight champions giving back to the community as it enhances our palates. Food Fight has served the Madison area by building up Downtown’s culinary scene, providing guidance to restaurant industry hopefuls, establishing traditions like Food Fight Foodie Week and making charitable contributions. From its unpretentious conception with the establishment of Monty’s Blue Plate Diner, to the restaurant giant it has become, Food Fight continues to put Madison, and its eclectic, ever-changing food scene, first.